Sharks are the most badass creatures the planet has ever seen. Rob Stewart, Activist and award-winning Sharkwater filmmaker talks about saving sharks. Guardians of our oceans, they manage every creature that lives in the ocean today... keeping coral reefs safe, and plants from being overgrazed by sea life. Sharks protect our oceans. We need sharks for ocean health. Oceans give us 60% of our oxygen, absorb carbon that causes global warming, absorbs our excess heat and feed a billion of us humans... and to top it off, they make millions in shark tourism. Yet, we kill up to 150 Million of them every year. We all can be heroes and make the world a better place. Save the Sharks.

Watch filmmaker Rob Stewart explain why we need sharks as a keystone species and how you can help.

Thank you for your passion and support! You can help save sharks by telling everyone you know to watch Sharkwater and spread the word. We need to give sharks a new image and make ocean conservation a part of our daily lives.

Learn more about sharks and educate your friends and family

One of the main obstacles in shark conservation is the perception that sharks are people-eating killing monsters. Teach people how important they are to ocean ecosystems and to the planet as a whole. Let everyone know that shark bites are extremely rare. You’re more likely to be killed by cows, lightning, and vending machines than from a shark bite. Do a presentation about sharks, or show them the movies, Sharkwater, Revolution and/or Sharkwater Extinction. You can download the free study guides, print images and look through our shark database.

Do Not Use Shark Products - #SharkFree

Sharks are sold to consumers under a vast number of fake names such as rock salmon, whitefish, and flake. Sharks are also found in cosmetics, pet food, ‘natural’ fertilizer’ and even leather products. Read labels to make sure you’re not accidentally supporting shark fishing.

Shark liver oil is often used as a moisturizer in cosmetics, called squalene or squalane on the label. Don’t buy these products unless you know they are from a vegetable source. Deep-sea sharks are being fished to extinction for their livers, 90 percent of which goes into cosmetics and personal care products.

All around the world organizations are protecting sharks by showing that ecotourism is more valuable than shark fishing. Dive with sharks and fall in love with them the same way Rob Stewart fell in love with them. The more shark ecotourism grows, the more incentives local communities will have to protect their sharks.

Ways to get involved:

For filmmaker Rob Stewart, exploring sharks began as an underwater adventure. It turned into a beautiful and dangerous life journey, discovering the balance of life on earth.

Driven by passion fed from a lifelong fascination with sharks, Stewart debunks historical stereotypes and media depictions of sharks as bloodthirsty, man-eating monsters and reveals the reality of sharks as pillars in the evolution of the seas.

Filmed in visually stunning, high definition video, Sharkwater takes you into the most shark rich waters of the world, exposing the exploitation and corruption surrounding the world’s shark populations in the marine reserves of Cocos Island, Costa Rica and the Galapagos Islands, Ecuador. 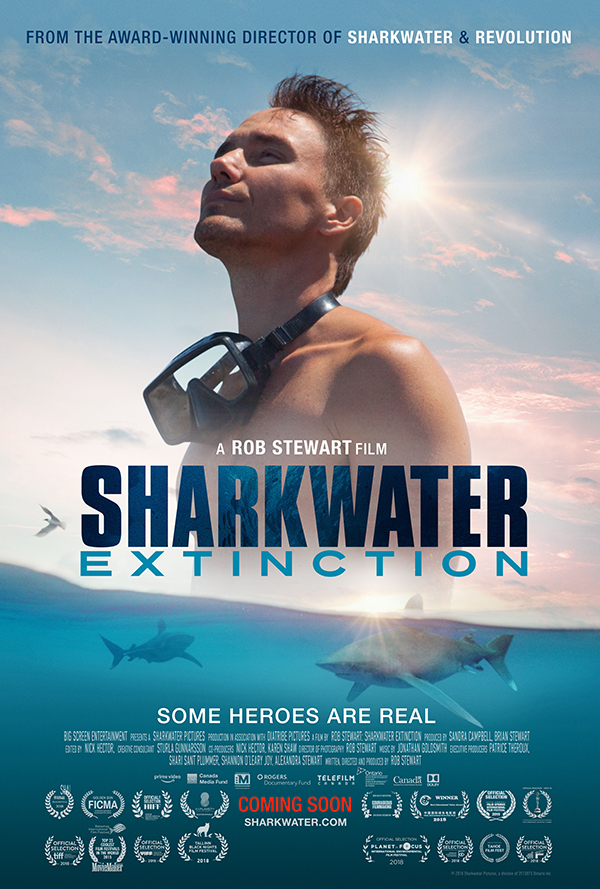 Sharkwater: Extinction (2018) is a thrilling and inspiring action packed journey that follows filmmaker Rob Stewart as he exposes the massive illegal shark fin industry and the political corruption behind it — a conspiracy that is leading to the extinction of sharks.

From West Africa, Spain, Panama, Costa Rica, France, and even in our own backyard, Stewart’s third film dives into the often violent underworld of the pirate fishing trade to expose a multi-billion dollar industry.

Shark finning is still rampant, shark fin soup is still being consumed on an enormous scale, and endangered sharks are now also being used to make products for human consumption. Stewart’s mission is to save the sharks and oceans before it’s too late.

Sharkwater, Rob’s first film, brought the devastating issue of shark finning used in shark fin soup to the world stage. His multi award-winning film changed laws and public policy worldwide, created hundreds of conservation groups. Today more than 90 countries have banned shark finning or the trade of shark products. Even so, Stewart finds sharks are still being fished to extinction.

In this highly anticipated follow up to the hit Sharkwater, filmmaker Rob Stewart brings us on an adventure 3.5 billion years in the making – from the evolution of life to the revolution underway to save us. Filmed over four years in 15 countries, Revolution captures some of the most remarkable wildlife spectacles ever recorded, and gives audiences a firsthand look into the biggest battle ever fought.

Discovering that it’s not just sharks that are in jeopardy – but us – Stewart looks to the evolution of life and past revolutions in order to uncover the secrets necessary to save our world. Joining the activists and youth fighting to save their future, Stewart’s journey of hope is startling, beautiful and provocative, revealing this crisis as an opportunity for everyone to become a hero.

Revolution has won numerous awards at top film festivals around the world.